Picture from a funeral 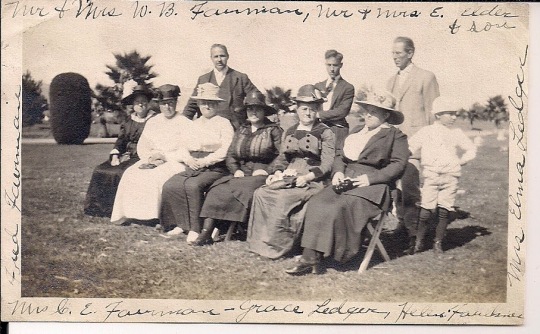 Nowadays it seems sort of tacky to take pictures at a funeral – not that it isn’t done – but I have noticed that in the past it was a much more common thing to do.  I suppose it was a time when families were together and dressed up and seemed like a good time to have a family picture.  I am lucky enough to have my grandmother’s photo album. Thank goodness my mom’s uncle rescued it from our garage and returned it years later or it may have gone the way of most things in our house – tossed out.  This picture was taken at the funeral of my grandfather Leonard Ledger (Oct. 15, 1892-Aug. 3, 1918) At what was  called Hollywood Cemetery but is now Hollywood Forever. There are lots of famous people buried there, movie stars mostly. There are large crypts and fancy headstones but grandpa  is in an unmarked grave near the wall behind Paramount Studios.  I went to look for him in the 1990’s and the office had to pull out a very old map to show where he was.  Why he does not have a headstone is a real mystery.  He had family, In this picture is just one member of his family, his sister in law Grace Ledger, the rest are my grandmother’s Fairman family.  But he had 5 brothers and one sister, but no one put a headstone.

My grandmother was Elma Etta Fairman (Dec. 23, 1892 – Oct. 8, 1933) and she is sitting in the middle of the picture in the dark ankle high dress. At this point in 1918 Elma had been married to Leonard for 5 years and they had a daughter, my mother.  According to my mom, her mom Elma didn’t say too much about Leonard except that he wasn’t a very nice person. He supposedly pushed her down a flight of stairs when she was pregnant with another child.  He had grown up in Louisiana and he would cross the street if a black man was walking on his side, a sign of those times but still sad.   Leonard died of Tuberculosis. I believe his father had also died of the disease and perhaps one of his sisters.

Since he died way before I was born he has always just been a young man in some old pictures.  Here he is with my mother on Mt. Hollywood (where the Hollywood sign is now) in 1918. 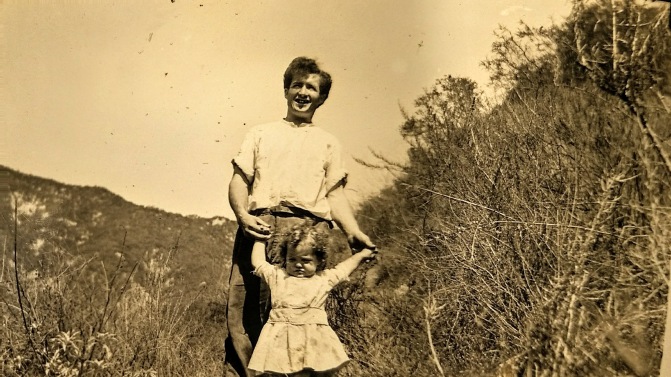 He had curly hair (my mom and I inherited that!) a broad flat nose (mom got that too) and he is almost always smiling in pictures.  I always have felt so sorry for him because he died so young.  My mother was put in an orphanage after he died, while her mother worked.  It affected her and her mental health for the rest of her life. My mother’s mother Elma carried on as best she could. I don’t know why family didn’t help my grandma with mom, I believe her mother did but she died in 1921.  My grandmother was living a different lifestyle in Los Angeles at the time.  She was gay.  She had a roommate named Amy and by looking at their pictures together they were very much in love. Things my mom told me confirmed what I had always suspected. I could care less,  you go grandma!  But mom was always embarrassed – I get it – again, the times they lived in.

So Leonard dying was sad, but it allowed Grandma to live the life she wanted until she died  in 1933 at the age of 41.  Elma also did not have a headstone until the 1980’s when my mom purchased one for it. But Leonard still rests, unnamed in that fancy cemetery. I have thought that one day I would honor him with one, just so he isn’t completely forgotten.

This site uses Akismet to reduce spam. Learn how your comment data is processed.

Join 36 other subscribers
Follow Searching for Judy's family on WordPress.com

A little about me